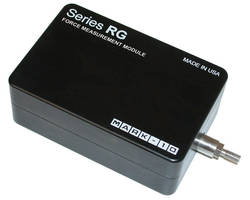 With rugged aluminum housing, RG smart load cell is designed for integration in to assembly systems, weighing systems, and process automation and testing automation applications. It is controlled by commands sent from PC/PLC thru its RS-232 connector. Device has ASCII command library that allows for functions including peak force recall, set points, data averaging, data filtering, and calibration. Module is offered in capacities of 2-200 lb.

All functions are controlled by commands sent from a PC or PLC via its RS-232 connector. The RG's ASCII command library allows for peak force recall, set points, data averaging, data filtering, calibration, and many other functions.

A rugged aluminum housing makes the RG durable enough to withstand the rigors of manufacturing environments. Capacities are available from 2 lb to 200 lb (10 N to 1000 N).