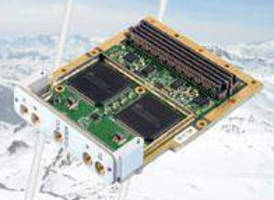 The Curtiss-Wright Controls FMC cards enable system designers to optimize the performance of Virtex-6-based digital signal processing (DSP) subsystems. The high-speed ADC I/O are routed directly to the Virtex-6 FPGAs on the host board via the FMC connector to eliminate data bottlenecks and increase performance.

"The integration of industry-standard FMC modules is a key element of Xilinx's targeted design platform strategy, and allows us to go to market with a simplified offering of base boards and daughter-card extensions for our Virtex-6 base platform," said Raj Seelam, senior marketing manager of Platform Solutions at Xilinx. "Curtiss-Wright Controls has fully embraced this approach, and their support of Virtex-6 FPGAs with the new ADC512 and ADC513 FMC modules ensures that our mutual customers can meet the performance requirements of the most demanding embedded and DSP applications."

Available in both air-cooled and conduction-cooled rugged versions, the ADC512 and ADC513 are designed for use in demanding reconfigurable computing applications, such as direct RF down-conversion, SigInt/Surveillance, Satellite communications and SDR. They speed and simplify the integration of FPGAs into rugged deployed embedded system designs.

About FMC (VITA 57)
FMC modules enable I/O devices that reside on an industry standard (VITA 57) mezzanine card to be attached to, and directly controlled by FPGAs that reside on a host board. About half the size of a PMC module, FMCs provide a small footprint, reduced I/O bottleneck, increased flexibility, and reduced cost through the elimination of redundant interfaces. To maximize data throughput and minimize latency, the FMC connector provides numerous I/O pins that support high-speed signals for moving data between the FMC and the FPGA.

Note: All trademarks are property of their respective owners.
Share