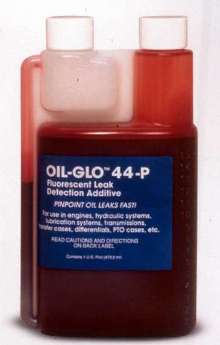 SpectrolineÂ® OIL-GLO(TM) 44 combines 2 dyes, one that fluoresces under UV light and one that fluoresces under blue light. Where leak is present, dye escapes with oil and remains at site. When system is scanned with high-intensity UV or blue light lamp, dye glows bright yellow-green. OIL-GLO(TM) 44 is suited for hydraulic systems, air compressors, cylinders, engines, gearboxes, offset printing presses, milling and injection molding machines, and oil coolers.

Westbury, New York - Spectronics Corporation has introduced Spectroline® OIL-GLO(TM) 44, a patented, fluorescent leak detection dye that is formulated specifically for large-capacity industrial systems. It is actually a unique "full-spectrum" blend of two different fluorescent dyes - one fluoresces best under ultraviolet light and the other under blue light. As a result, regardless of the type of inspection lamp used, OIL-GLO 44 will glow brightly to reveal even the smallest and most elusive leaks.

This new dye pinpoints leaks in all oil-circulating systems. It quickly detects leaks in hydraulic systems, air compressors, cylinders, engines, gearboxes, offset printing presses, milling and injection molding machines, oil coolers, and much more. OIL-GLO 44 contains over twice the amount of fluorescence power per ounce as other dyes on the market, so it is extremely cost-effective.

Fluorescent leak detection works like clockwork. Simply add OIL-GLO 44 dye to any oil-based system and allow it to circulate. Wherever there is a leak, the dye escapes with the oil and remains at the site of all leaks. When the system is scanned with a high-intensity ultraviolet or blue light lamp, the dye glows bright yellow-green. OIL-GLO 44 remains safely in the system until the oil is changed, so regular inspections will detect any future leaks before they can damage the equipment.