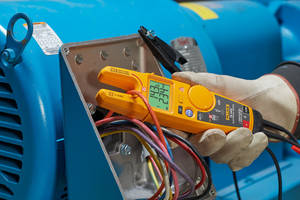 Fluke® T6 Electrical Testers are offered in T6-600 and T6-1000 models. Units are used to measure true-rms in crowded junction boxes or conductors and come with open fork. Products are 1000 V CAT III, 600 V CAT IV safety rated and use Fluke FieldSense technology. Testers offer voltage and current readings. T6 can measure voltage up to 1000V and 4/0 wires up with current up to 200 A.

At the heart of the T6 testers is the new Fluke FieldSense Technology, that enables the testers to give simultaneous, reliable voltage and current readings, not just simple go/no-go voltage detection.