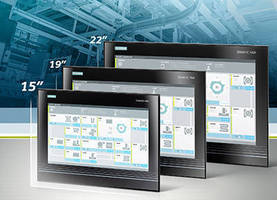 Intuitive and efficient operation of machinery and plant

Siemens is launching 15" widescreen devices for gesture and multi-touch operation onto the market. The flat panel monitor Simatic IFP1500 and the two panel PCs Simatic IPC477D and IPC677D with a 15" display will complement the existing portfolio of 19" and 22" devices. Outstanding features include industrial-standard anti-glare for easy legibility from wide viewing angles, high image resolution for precise operation, and automatic detection of spurious touching and operation caused for example by catching the screen with the ball of the hand, or soiling. The continuous glass front is scratch-proof and resistant to chemicals, while a metal surround protects the glass edge from mechanical damage. Machinery and plant manufacturers benefit from the multi-touch devices from Siemens for modern operating concepts featuring zooming, scrolling and context-sensitive displays. Multi-touch user interfaces can be implemented easily and efficiently thanks to the industry-specific device design, the practical functions and the supporting engineering tools.

The new flat panel monitor Simatic IFP1500 and the new panel PCs Simatic IPC477D and IPC677D with a 15" display are ideal for the intuitive, efficient operation of machinery and plant using one or more fingers as well as gestures or two hands. They can also be operated while wearing protective gloves, and can be used for single-touch applications. The new devices with projected capacitive touchscreens (PCTs) designed specifically for industrial applications are splash-proof and dirt-resistant. The special design, which features a continuous glass front and keyless operation, makes the new products ideally suited to applications with rigorous cleanliness and hygiene requirements, for example in the food and beverages industry. The devices with an aluminum housing are designed for 24-hour continuous operation, and comply with high-temperature, vibration, shock and EMC requirements.