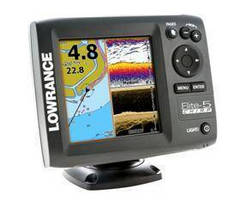 Offered in 5 in. and 7 in. versions with CHIRP sonar technology, Elite-5 and Elite-7 can distinguish between baitfish and game fish targets. Units include single-frequency Broadband Sounder capability, and DownScan Imaging™ which provides picture-like views of structure and bottom detail. With TrackBack™ feature,Â anglers can scroll back in recorded sonar history to review structure, transitions, and fish targets. Models with chartplotter capabilities feature built-in GPS antenna and US map.

“The Elite CHIRP series includes all the proven, high-performance features found in the highly successful Lowrance Elite Hybrid Dual Imaging (HDI) line and adds powerful CHIRP sonar technology for an even better view beneath your boat,” said Leif Ottosson, CEO, Navico. “Packed with three proven sonar technologies at an affordable price, the new Elite CHIRP series continues our commitment to provide real benefits for anglers — helping them catch more fish and make the most of their time on the water.”

Model options include Elite CHIRP displays packed with an 83/200/455/800 kHz or 50/200/455/800 kHz Hybrid Dual Imaging (HDI) transducer with depth capabilities to 1,000 and 3,000 feet, respectively. Optional accessories include a series of bronze thru-hull HDI transducers, a trolling-motor transducer adapter kit and flush-mount kit. The Elite-7 CHIRP, featuring NMEA 2000® capability, can also be paired with the Lowrance Point-1 external GPS antenna with built-in electronics compass, while the Elite-5 CHIRP, with NMEA 0183 connectivity, is compatible with the LGC-16W external GPS antenna.

Protected by a one-year limited warranty and the Lowrance Advantage Service program, Elite-7 and Elite-5 CHIRP models can be purchased from authorized Lowrance dealers and distributors throughout the United States and Canada. Retail prices range from $649 and $499 for the Elite-7x and Elite-5x CHIRP fishfinder, to $869 and $669 for the Elite-7 and Elite-5 CHIRP fishfinder/chartplotter models bundled with Navionics Gold cartography, respectively. For more information on the Lowrance Elite CHIRP series, the entire Lowrance line of marine electronics, or to locate an authorized Lowrance dealer, please visit www.lowrance.com.