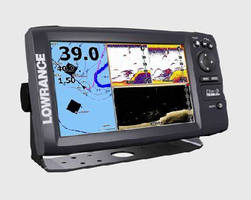 Tulsa, Okla. – Lowrance®, a world-leading brand in fishing electronics since 1957 — announced today the release of the latest and largest in a series of award-winning EliteTM fishfinder/chartplotter displays, the Elite-9 CHIRP. The Elite-9 CHIRP series features a 9-inch widescreen SolarMAX™ Plus display for enhanced viewability especially in sunlight. The Elite CHIRP lineup now includes 4-, 5-, 7- and 9-inch fishfinder/chartplotter models, as well as standalone fishfinder displays, and all Elite CHIRP models can produce and display multiple CHIRP sonar frequency settings from a single Lowrance Skimmer® transducer.

The Elite-9 CHIRP sonar provides improved target resolution and superior noise rejection for clearer, easy-to-see baitfish and game fish targets. By displaying two user-selected ranges simultaneously, anglers can more easily observe better target separation at greater depths and mark fish clearly at higher boat speeds. When combined with the Lowrance HDI Skimmer transducer, the Elite-9 CHIRP can also display a DownScan Imaging™ view of the area beneath the boat, for picture-like views of fish-holding structure. The Lowrance exclusive DownScan Overlay™ combines DownScan Imaging with CHIRP Sonar for a brilliant presentation that clearly exposes fish targets from surrounding structure. With TrackBackTM, anglers are able to scroll back in recorded sonar history to review structure, transitions and fish targets and mark locations with a waypoint — reducing the time required to search for productive fishing areas.

“We are committed to combining technology that helps anglers maximize their time on the water, with a product that delivers the right set of key features” said Leif Ottosson, CEO, Navico. “The new Elite-9 CHIRP is packed with all the proven features that have helped the Lowrance Elite series dominate today’s fishing electronics market – now with a larger, widescreen format that appeals to a growing audience of anglers.”

Protected by the Lowrance Advantage Service program, the Elite-9 CHIRP can be purchased from authorized Lowrance dealers and distributors throughout the United States and Canada for $1,399 (83/200 kHz) and $1,599 (50/200 kHz). For more information on the Lowrance Elite-9 CHIRP (including pricing for the Elite-9x and Elite-9x Nav+ CHIRP models), the entire Lowrance line of marine electronics, or to locate an authorized Lowrance dealer, please visit www.lowrance.com.

To better understand what makes CHIRP Sonar different from single-frequency fishfinder sonar, along with the advantages it provides, please see the following video on Lowrance CHIRP Sonar Basics: