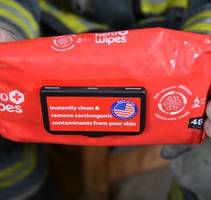 Firefighter Hero Wipes are used to clean toxic, cancer-causing carcinogens from the skin. Units allows user to isolate and trap harmful chemical compounds. Product can be stretched to maximum extent and is virtually indestructible.

Diamond Wipes International, Inc. ("Diamond Wipes"), the leading developer and manufacturer of wipe products for over 20 years, announced today the launch of a new decontamination ("decon") body wipe, Hero Wipes™ that is specially formulated to remove toxic, cancer-causing carcinogens from the vulnerable skin of firefighters before they leave the scene of a fire.

Hero Wipes is scientifically tested and shown to be extremely effective in absorbing and clearing away harmful toxins that are linked to cancer. Specifically, Hero Wipes was shown to remove 98 percent of the toxic flame retardant TCEP and 83 percent of the carcinogen Benzopyrene, which is found in soot.

Fires carry soot and smoke from flame-retardants and other high-toxin synthetic materials. Furthermore, as firefighters wear an arsenal of protective gear into a fire, their body temperatures rise, which increases the skin's absorption level. These factors make the decontamination process a critical post-fire protocol for any firefighter. While the use of wipes for on-scene decon has been a customary process for many years, the wipes used are generally baby wipes, which unfortunately are not formulated to actively counter, attract and remove harmful carcinogens.

"The creation of Hero Wipes really began because of a conversation we had with a firefighter, who shared how distressed he was over the alarming cancer statistics faced by his fellow firefighters," said Eve Yen, founder, co-owner and president of Diamond Wipes. "I knew we could do something to help. We formulated a product that enables firefighters to perform effective on-scene decon, with a wipe that could actively remove the harmful carcinogens they commonly encounter."

Hero Wipes was established with a patent-pending balanced blend of ingredients that are shown to isolate and trap harmful chemical compounds within the wipe. They are intended for vigorous usage – each wipe is thick, tough, stretchable and virtually indestructible compared to run-of-the-mill baby wipes so they won't breakdown. Moreover, with its proven formula, Hero Wipes is ideal for the on-scene decon protocol as usage of an effective wipe limits the amount of time harmful carcinogens lingers on the skin.

"Once we developed Hero Wipes, we felt it was imperative to prove that it was effective, and invested in third party testing," added Yen. "With this data, we are able to stand behind Hero Wipes as an effective solution. Quite frankly, it's just too important to the men and women who need a product like this."

According to a study by the National Institute for Occupational Safety and Health, firefighters have a 9 percent higher risk of being diagnosed with cancer and a 14 percent higher risk of dying from cancer than the general US population. The risks are significantly higher for certain types of cancer including malignant mesothelioma and multiple myeloma.

Importantly, effective on-scene decon can reduce the amount of carcinogens that create an invisible but harmful trail, which has been traced to firefighters' personal vehicles and homes, as shown in the 2015 Sylvester Comprehensive Cancer Center's Firefighter Cancer Initiative.

Members of the firefighter community who want to learn more or make product requests can contact Diamond Wipes Customer Service at 1 (800) 454-1077 or email requests to cs@diamondwipes.com.

Diamond Wipes International (www.diamondwipes.com) specializes in developing and engineering new types of wipe products, all made in the USA. The company has over 20 years of developmental leadership with a continual focus on providing marketplace solutions. The company is headquartered in Chino, Calif., with additional manufacturing facilities in Bucyrus, Ohio. Diamond Wipes is proud to be an official sponsor of the National Fallen Firefighters Foundation (https://www.firehero.org) and donates 2 percent of revenue from the sale of Hero Wipes to the foundation.