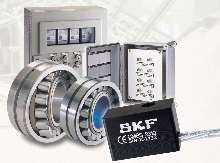 SKF Copperhead provides early warning of many common fan problems, including fan unbalance caused by the buildup of debris on fan impellers, and mechanical looseness due to improper securing of machine components or other factors. The system also detects bearing misalignment, inadequate lubrication and other problems that can lead to premature bearing failure.

Copperhead Components
SKF Copperhead integrates smoothly into existing plant automation. The heart of the fault-detection system is the Copperhead sensor, which combines vibration accelerometer and temperature-monitoring capabilities in a single unit. Copperhead sensors are permanently mounted to bearing or motor housings and attached via cable to a component called the MCM module. The MCM continuously monitors fan vibration and evaluates machine frequencies using SKF's unique acceleration enveloping technique. A continuous signal for "enveloped" vibration and temperature can be transmitted to plant automation. The MCM also has internal alarm and relay contacts for standalone operation.

SKF Copperhead can also operate in periodic mode. Here, vibration and temperature readings can be taken periodically from the permanently mounted Copperhead sensors by a portable monitoring device such as the SKF Microlog (or the equivalent). Plant workers then evaluate the operating condition of the fan. Data can be stored on a PC and trended over time.

SKF Copperhead is available in complete, pre-engineered packages. It can also be customized to meet specific application requirements. For example, Copperhead systems can be equipped with digital temperature and vibration displays.