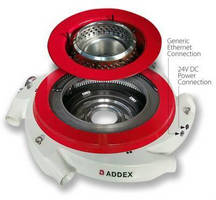 "We have re-engineered our external gauge control system so it readily meets today's OEM requirements in terms of accessibility and adaptability while at the same time reducing the cost," said Rick von Kraus, president of Addex Inc. The EGC is an automatic system that reduces film thickness variations by more than 50%, typically resulting in a 5% to 6% raw material savings.

Addex simplified the original air ring structure by moving the electronic circuit board (the brains) from outside of the air ring into the plenum area. This integration offers simplicity, enabling the user (end user or OEM customer) to rely on its own control panel if desired. An end user or OEM customer may also use its own thickness measuring system and feed it via the Ethernet connection to the air ring.

Other key options for the OEM include mapping hardware and software for the control processor and monitoring devices for the reversing nip position and nip roll speed along with a control algorithm which converts the mapped gauge profile into instructions for the air ring software.

Another key benefit is that the new EGC air ring has just four plenum sizes which accept lip sets ranging from 4-in/100mm to 28-in/700mm, unlike the previous product which required a plenum for each lip set.

The re-engineered EGC system retains its most unique feature - the most control zones in the industry for air ring-based systems. The number of control zones ranges from 90 to 288 depending on the air ring size. A scanning actuator raises or lowers as many teeth (control zones) as needed to open or close the air flow channels (vanes) and automatically adjusts the cooling air, thus correcting thickness variation in the blown film. Just two motors activate all the movable parts in the system compared to competitive systems which use one motor per zone. Like the previous EGC air ring, one motor is used to adjust the air flow and the second one adjusts the first motor 360 deg.

The new EGC unit is easily installed with just a 24V DC power connection and a standard Ethernet connection. It is commercially available worldwide.

Addex Inc., based in Stoughton, Mass., USA, was founded in July 1989 as a supplier of high-performance components for blown film production. Today, Addex has supplied some of the most sophisticated technologies capable of producing very flat film, without camber, with the lowest possible gauge variation and the highest possible output. The company is a leading manufacturer of many patented blown film components and systems including manual and automated gauge controls, dies, air rings, internal bubble cooling systems, oscillating haul-offs, and winders, as well as leading designs of gravimetric blenders and bubble cages. For more information, visit www.addexinc.com.