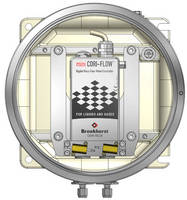 
Bronkhorst Cori-Tech (The Netherlands) announces the release of a new option for its mini CORI-FLOW(TM) series mass flow meters for low flow rates. The compact flow meters, operating via the Coriolis principle, are now available with IECEx and ATEX approval II 2G Ex d IIB T6 for use in hazardous areas. Hereto the instrument is built in into a rugged enclosure with separated compartment for the electronics. The flow meters, suitable for both liquid and gas flow applications, cover flow rates from 0.1 g/h to 30 kg/h and can be used in systems with pipeline pressures up to 140 bar (2000 psi). The unique design of the miniature Coriolis sensor features superior response time and high accuracy, irrespective of changing operating conditions with regard to pressure, temperature, density, conductivity and viscosity.

Applications can be found in process control systems as for example in food, chemical and petrochemical plants.