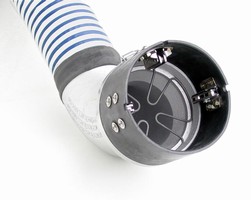 
Magnegrip Airflow Increased
MagneGrip Exhaust Extraction Systems recently introduced new technologies that increase airflow and eliminate toxic exhaust emissions even faster and more effectively. This is achieved through the patented nozzle assembly with a redesigned protective screen that reduces airflow resistance by 60% over standard grid designs and a new aluminum elbow that improves airflow by 35%. In addition, five-inch hoses, standard on most applications, provide 55% more available airflow than four-inch hoses. These improved airflow efficiencies maximize the cooling and removal of dangerous exhaust gases and particulates. MagneGrip systems meet NFPA 1500 Standard for "no less than 100% effective capture" and have the highest airflow of any sealed system.