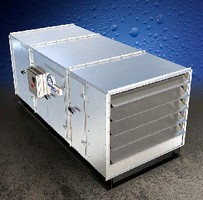 
Eliminate Use of Cooling Pads; Minimize Risk of Airborne Pathogens

KUBE coolers are available to provide from 3000 to 30,000 CFM with variable speed control, which is standard. Heating can be provided via indirect heat exchanger up to 400,000 BTUs per unit. All units come with network capability. Touch screen controls allow up to 15 units to be remotely controlled via PLC or computer to maximize efficiency. All units employ a four stage filtering process, including food grade final filter.

ODP fan motors have a 5 year warranty. Both a full frame C-channel structural steel base and hinged, gasketed and insulated locking cabinet door are standard.
Bessamaire specializes in the design and manufacture of evaporative coolers, direct and indirect gas-fired heating units and air turnover systems for industrial and commercial use. Over 100,000 systems have been supplied since the company's founding in 1953. Customers include the majority of Fortune 500 companies.