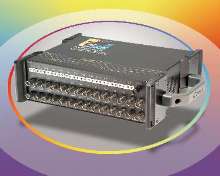 The DaqBook/2000 series provide the same level of performance as IOtech's popular PCI DaqBoard/2000(TM) series, plus more. The DaqBook/2000 series includes a built-in 10/100BaseT Ethernet interface capable of transferring acquired data back to a PC at a rate of 200 Kreading/s. The series also provides a 16-bit, 200-kHz A/D, which can be expanded to over 1000 I/O channels. With 13 built-in ranges, as well as 100% digital calibration, the DaqBook/2000 series is unparalleled in its class of external, multifunction data acquisition devices. Over 40 signal conditioning and expansion options are available, for measuring thermocouples, strain gages, accelerometers, RTD's, and much more.

The DaqBook/2000 series includes four 10-MHz counters that can synchronously measure frequency and count pulses concurrent with analog measurements. Also, there are 40 digital I/O lines, which can be synchronously read along with analog and frequency measurements. The 40 TTL-level digital I/O lines can be expanded up to 272 channels, including options for optical isolation and relay closures for switching applications. Additionally, the 2 timer outputs are capable of generating square waves up to 1 MHz.

The DaqBook/2001 and DaqBook/2020 also include 4-channels of 16-bit analog output, capable of generating waveforms from on-board buffers containing 64K points per channel, with a maximum update rate of 100 kHz.

In short, the DaqBook/2000 series provides all of the features associated with high-performance plug-in boards-but in a compact, metal enclosure suitable for lab as well as portable applications.

Pricing
The DaqBook/2005 provides low-cost multifunction Ethernet-based data acquisition and is offered at $2,499; The DaqBook/2001 is the same as the DaqBook/2005 plus 4 channels of 16-bit/100-kHz analog input, and is offered at $2,999. The DaqBook/2020 is our full-featured product, which includes BNC connectors for all I/O, plus 14 channels of universal thermocouple input. Like the other DaqBook models, it can be expanded to over 1,000 I/O channels and is $4,999. All products-along with their full suite of signal conditioning, expansion, and software options-are available from stock.

About IOtech
IOtech produces data acquisition hardware and software for use in PC-based test and measurement and industrial automation systems. Its products are used in research and manufacturing facilities and are sold throughout the world. IOtech, Inc. is
located at 25971 Cannon Road, Cleveland, Ohio, 44146; telephone: (440) 439-4091; fax: (440) 439-4093; E-mail: sales@iotech.com; www.iotech.com.