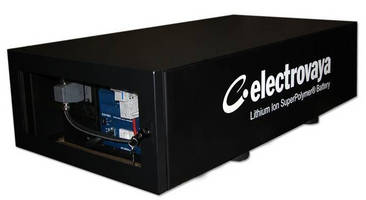 Available in sizes from 3–20 kWh, EnergyBlock stores power from grid or solar panels for later use. This lithium-ion energy storage system, intended for home use, suits those subject to time-of-use charges. In addition to storing off-peak power for later use at during peak times, storage solution can be used to provide power in remote locationsÂ or as emergency power supply.

Toronto, Ontario – Electrovaya Inc. (TSX: EFL) today announced the launch of its lithium-ion energy storage system for home usage.  The battery stores power from the grid or from solar panels and stores it for later household use.

For consumers subject to time-of-use charges, the EnergyBlock can be used to store off-peak power to be used later during peak times, lowering the amount of peak-rate costs for the user.  In some regions, utilities occasionally provide negative pricing to dump excess power when demand is very low, so users may actually be paid to store energy.  The EnergyBlock can also store energy directly from solar panels, power in remote locations and emergency power.

Systems are available in sizes from 3kWh – 20 kWh.  The ideal size for most households is 7kWh, which provides several hours of power for the typical consumer.

“We’re expecting this product to be very popular in places like Germany and Japan as they move away from nuclear power towards sustainable alternative energy,” says Dr. Sankar Das Gupta, CEO of Electrovaya Inc.  “Asia is another key market, with an incomplete electric grid, and we believe there will be a large market opportunity in North America, where we’re paying twice as much for peak power and need a way to store cheap off-peak power.”

Electrovaya will be speaking at the Barclays Capital 2012 Global Automotive Conference on November 14th, 2012 in New York City.

Electrovaya Inc. (TSX:EFL) designs, develops and manufactures proprietary Lithium Ion SuperPolymer® batteries, battery systems, and battery-related products for the clean electric transportation, utility scale energy storage and smart grid power, consumer and healthcare markets. The Company's mission is to accelerate clean transportation as a commercial reality with its advanced power system for all classes of zero-emission electric vehicles and plug-in hybrid electric vehicles. The Company's other mission is to deliver utility scale energy storage systems for the highest efficiency in electricity storage, whether the electricity is generated from intermittent wind and solar power or from other sources. Founded in 1996 and headquartered in Ontario, Canada, Electrovaya has production facilities in Canada, USA and Europe with customers around the globe. To learn more about how Electrovaya is implementing clean energy, please explore www.electrovaya.com.