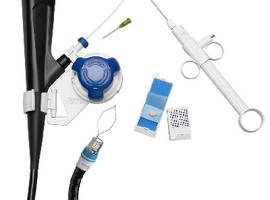 A common precursor to esophageal cancer is Barrett's Esophagus, which is a complication of acid reflux disease that causes abnormal changes to the lining of the esophagus. More than 900,000 people worldwide are diagnosed with Barrett's Esophagus[1. Nearly 10 percent of patients with chronic heartburn develop Barrett's Esophagus and endoscopic management may help reduce the potential for an esophagectomy, a more invasive and costly surgery.[2,[3

The company also enrolled the first patient in a multi-center, prospective, post-market registry initiated to study the performance of the Captivator EMR Device for endoscopic resection of abnormal tissue growth known as early neoplasia, specifically in Barrett's Esophagus.  It will document procedural success, procedure time, quality of acquired tissue for histopatholgy, and procedural complications. The registry will enroll approximately 300 patients at 16 clinical centers in eight countries, and is expected to be completed in 2016.

"The Captivator EMR Device provides improved endoscopic visualization, so the resection can be better directed to the area of interest," said Dr. Jacques Bergman, professor of Gastrointestinal Endoscopy at University of Amsterdam, the Netherlands, and lead investigator of the global registry. "The enhanced view, along with easy passage of accessory devices and the ability to use compatible hemostatic devices to manage potential bleeding and complications may enable a safer endoscopic resection."

The Captivator EMR Device provides physicians with a 360 degree unobstructed peripheral view for more complete visualization of the diseased area when performing resections. And unlike other EMR devices, accessory devices such as the Boston Scientific Resolution™ Clip and Interject™ Needle can be used with the device during the procedure to manage potential complications quickly. The Captivator EMR Device is also currently the only EMR device that includes a pathology kit to provide added convenience for endoscopists and pathologists.

The Captivator EMR Device is available in the United States, Europe, Singapore, Australia and Puerto Rico.

Boston Scientific transforms lives through innovative medical solutions that improve the health of patients around the world. As a global medical technology leader for more than 35 years, we advance science for life by providing a broad range of high performance solutions that address unmet patient needs and reduce the cost of healthcare. For more information, visit www.bostonscientific.com and connect on Twitter and Facebook.