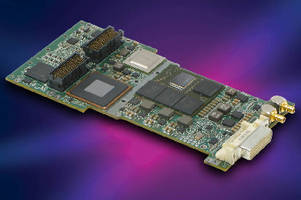 Capable of routing simultaneous digital and analog video streams in multiple output formats, the rugged XMC is ideal for harsh environments that have versatile video overlay and capture requirements.

Many of the XMC’s output video channels are provided through the E8860’s native integrated video ports for processing digital HDMI, DVI and SD-SDI video and analog NTSC/PAL RGB, S-video, including RS-170 and STANAG 3350 protocols.  A sophisticated FGPA can be added alongside the GPU to support even more video protocols and formats as well as signal conditioning and compression.

An eight-lane PCIe link that connects the host system with the new XMC ensures high-speed transfer of graphics and video.  The M596 is available with support for VxWorks, INTEGRITY, Windows and various distributions of Linux.