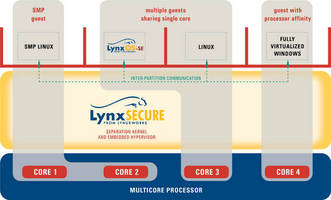 SAN JOSE, CA, Embedded Systems Conference - LynuxWorks(TM), Inc., a world leader in the embedded software market, today announced availability of LynxSecure 4.0, its embedded virtualization solution for single and multicore processors. This new release of the award-winning LynxSecure separation kernel and embedded hypervisor adds support for the Intel® Core(TM) i7 and i5 processor families and enables new configurations of guest operating systems to maximize the usage of these powerful processors. The combination of LynxSecure 4.0 and the Intel Core i7 will provide embedded developers across many industries the performance and security enhancements they require for their next generation of products.

Widely used to develop applications in major military programs to the highest levels of security, LynxSecure's highly secure virtualization solution is equally applicable for industries such as networking, consumer, industrial, medical and automotive. LynxSecure makes it possible to safely run multiple applications and different guest operating systems on a single platform by isolating them into separate partitions to prevent unintended or dangerous software interactions. Using multicore processors, LynxSecure provides the ability to consolidate two normally physically separate systems into one unit. This allows for a huge savings in costs, system maintenance and footprint space. It also opens the door for innovative new devices that leverage multiple operating systems and reduce complexity.

"The use of a separation kernel to achieve virtualization provides a versatile platform for legacy code preservation and migration, hardware consolidation, system resource management and sharing. Still, probably the greatest benefit conferred by virtualization on embedded systems design is in the area of security," said John Rushby, PhD, program director in the Computer Science Laboratory of SRI International in Menlo Park, CA, who originally introduced the concept of the separation kernel.

Arun Subbarao, VP of Engineering at LynuxWorks added, "LynxSecure 4.0 employs a range of security and trustworthy computing capabilities to achieve optimal protection and safety while offering a huge degree of flexibility in its system configuration. We are fortunate to have advisors like John Rushby and his team at SRI to help us build what we believe to be the best secure separation kernel available today."

For defense applications requiring the highest levels of security, LynxSecure provides a standards-based, secure, multi-domain computational platform that serves as a trusted foundation for applications with low-, medium- and high-assurance requirements that are all running concurrently on a single system. LynxSecure was designed from the ground-up to be evaluated at the highest levels of Common Criteria evaluation. It also allows legacy applications to run unmodified, enabling systems to be modernized with increased information sharing and security.

"Unleashing the power of multicore and virtualization technologies, LynxSecure offers an exciting new way for manufacturers to develop their next-generation applications. It is now possible to rapidly create new highly integrated platforms that provide more processing power and unprecedented security at a lower cost and reduced footprint," said Gurjot Singh, CEO at LynuxWorks. "With the introduction of LynxSecure 4.0 we have a product that is unparalleled in feature set and performance, and the multiple awards that LynxSecure has received over the last year demonstrate that industry experts agree."

Like all LynuxWorks operating systems, LynxSecure is based on open standards. LynxSecure 4.0 provides a seamless migration path for LynuxWorks customers whose Linux- and POSIX®-based applications can now run on virtualized Red Hat Linux and LynxOS family environments within LynxSecure partitions. LynxSecure 4.0 will be available in May 2010.

LynuxWorks, a world leader in the embedded software market, is committed to providing open and reliable real-time operating systems (RTOS) and software tools to embedded developers. The company's LynxOS family of operating systems offers open standards with the highest level of safety and security features, enabling many mission-critical systems in defense, avionics and other industries. The latest product in the portfolio, the award winning LynxSecure offers a secure separation kernel and embedded hypervisor that forms a platform for the development of high assurance systems. Since it was established in 1988, LynuxWorks has created technology that has been successfully deployed in thousands of designs and millions of products made by leading communications, avionics, aerospace/defense, and consumer electronics companies. LynuxWorks' headquarters are located in San Jose, CA. For more information, visit www.lynuxworks.com.