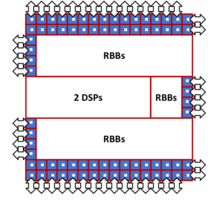 Reconfigurable embedded FPGA to transform the design of data center, networking and base station chips

Flex Logix Technologies, Inc., the leading developer of embedded FPGA IP cores and software, today announced it has completed design of a high-performance IP core for TSMC 16FF+ and 16FFC, with performance for wide, single-stage logic around ~1GHz at worst case PVT conditions. Expected to be fully validated in silicon in early 2017, the EFLX-100 embedded FPGA IP core for TSMC 16FF+ and 16FFC will enable customers to design their next-generation networking, base station and data center chips with reconfigurable RTL that can be quickly, easily and cost-effectively updated or changed at any time after fabrication, even in-system.

The EFLX-100 embedded FPGA core in TSMC 16FF+ and 16FFC has an architecture optimized for high speed control logic where hundreds of signals can be processed at speeds around 1GHz with single stage RTL logic, producing dozens of control signals. The EFLX-100 can be "arrayed" to build high speed control logic blocks from ~100 LUTs to ~3000 LUTs. The 16nm version of EFLX-100 has two architectural changes and physical design optimizations from the 40nm version:

Flex Logix has already begun design of the larger EFLX-2.5K embedded FPGA IP cores in TSMC 16FFC: both the all-logic and DSP versions, which are interchangeable to build arrays over 100K LUTs. These will be available in early 2017 and will be validated in silicon. A TSMC 16FF+ version will also be available. The EFLX-2.5K enables large, fast array that can be used to implement accelerators for wireless base stations, networking and data center processor acceleration functions.

The software for programming and checking timing performance is available now for TSMC 16FF+ EFLX-100 arrays. Flex Logix offers evaluation licenses at no cost so designers can check RTL performance and architecture ideas.

Flex Logix proves out all of its IP cores in silicon for each major process node to ensure low risk of integration, even though its IP is all digital and compatible with logic DRC rules and the IP is simulated under worst case conditions: maximum frequency, high utilization and RTL with very high toggle rates to check for worst case static and dynamic IR drops. Validation verifies in silicon that the recommended power grid architecture enables full speed operation at full utilization with high toggle rates under worst case conditions. The company checks enough array combinations to be sure that the inter-core array-interconnect is functional on all sides thus ensuring array reliability.

Flex Logix uses an on-chip PLL to test on-chip at frequencies of 1GHz+ and above to confirm all functional and performance operation over the full temperature and voltage range. Each EFLX array interconnects with external I/O for test and with on-chip SRAM for high speed pattern testing. Each array has a process, voltage and temperature monitor to ensure precise control over testing at worst case conditions. Power domains are dedicated to each EFLX array and separately for SRAM and I/O and PLL so voltage range can be measured precisely for each IP. Once validation is complete, a detailed validation report will be available under NDA to interested customers.

The validation chip for the EFLX-100 IP cores in TSMC 16FF+/FFC will soon be in fabrication, and expected to complete validation in early 2017.