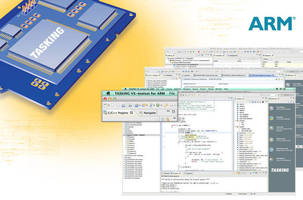 Traditionally embedded software development tools have been available exclusively for the Windows operating system and Altium has a long history in providing its TASKING cross compilers and debuggers for running on Windows, including its TASKING VX-toolset for ARM Cortex-M. With ARM Cortex-M based microcontrollers becoming popular in broad market consumer applications, especially with wearable electronics and electronic systems that can be controlled from the iPhone, it is apparent that embedded software engineers want to use the Mac as their development platform.

To serve this development community, Altium has developed a native OS X port of release v5.1r1 of its TASKING VX-toolset for ARM Cortex-M, bringing its C compiler suite with Eclipse based IDE and debugger to Mac computers.

Previously, embedded-application developers that preferred Mac computers relied on virtual machines hosting the Windows operating system within OS X in order to run an embedded cross compiler. This led to an inefficient workflow and a variety of challenges, including problems connecting a debug probe reliably to the debugger running inside the virtual machine. The native port to OS X of the TASKING compiler breaks down the barriers for developing embedded applications for Mac users, while allowing them to work efficiently in their platform of choice. Cooperation with STMicroelectronics made it possible to offer in-circuit debug capabilities with the Eclipse integrated TASKING debugger, using the USB port on the Mac to connect to the ST-LINK/V2 debug probe.

Key features of the TASKING VX-toolset for ARM Cortex-M for Mac OS X include:

• Eclipse based IDE with integrated compiler and debugger

• Support for a wide range of Cortex-M based microcontrollers from different vendors, such as STMicroelectronics, Freescale, Infineon Technologies, Silicon Labs, Spansion, Atmel and Texas Instruments

• a wide range of ready to use middleware components, such as support for CAN, USB, I2C, TCP/IP, HTTP(S), Bluetooth, file systems, graphical user interface, and touch panel control

Developers using OS X that require certification of their embedded application for functional safety standards such as IEC 61508 and ISO 26262, benefit from TASKING’s ISO 26262 Support Program for its new ARM toolset on OS X. A manufacturer of an electronic (sub) system is responsible for obtaining certification credit and as part of the process has to assess the required level of confidence in the utilized software tools. Altium supports this through the availability of a Compiler Qualification Kit as well as optional Compiler Qualification Services.

The VX-toolset for ARM release v5.1 is available now on OS X Mavericks, and on OS X Yosemite once it is widely available. Pricing starts at USD 1,995 (€ 1,595) for the TASKING VX-toolset Standard Edition and USD 2,995 (€ 2,395) for the Premium Edition with the award winning Software Platform. Hardware debug support is available in the Professional and Premium Editions through the ST-LINK/V2 debug probe from STMicroelectronics.

TASKING is an Altium brand. TASKING development tools are used by carmakers and the world's largest automotive Tier-1 suppliers to program microcontroller based power train, body control and safety related applications around the globe. More than ten thousand users rely on the TASKING compilers and debuggers to create richer next-generation applications while achieving optimum reliability, security, and performance. TASKING compilers are also part of Altium Designer and installed on hundreds thousands of developer’s desktops around the globe. In 2012 the TASKING brand celebrated its 35-years anniversary of technology leadership, quality tools and customer support excellence.

Altium Designer, a unified electronics design environment links all aspects of smart systems design in a single application that is priced as affordable as possible. With this unique range of technologies Altium enables electronics designers to innovate, harness the latest devices and technologies, manage their projects across broad design ‘ecosystems’, and create connected, intelligent products.

Founded in 1985, Altium has offices worldwide, with US locations in San Diego and Boston, European locations in Karlsruhe, Amersfoort, Kiev, Moscow and Zug and Asia-Pacific locations in Shanghai, Tokyo and Sydney. For more information, visit www.altium.com. You can also follow and engage with Altium via Facebook, Twitter and YouTube.