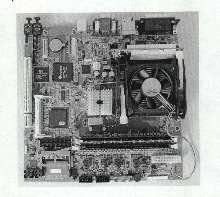 The EMB-845E features the Intel® 845E chipset, which supports high CPU frequencies up to 3.06GHz with the front side bus running at 400MHz or 533MHz. Support for UDMA 100 IDE devices is facilitated through the Intel® ICH4 Controller Hub. The Intel® 845E chipset supports Hyper Threading to deliver the maximum throughput for data processing possible from Pentium 4 or 4M CPUs equipped with this technology. To handle today's memory intensive applications, this board provides support for up to 2GB DDR DRAM (DDR 266/200).

This full function EmbeddedATX form factor design includes features such as the Silicon Motion Cougar3DR16 3D graphics engine with AGP 4X bandwidth delivering superior graphics performance without the additional cost of a separate graphics card. The graphics controller is capable of displaying up to a 1600 x 1200 resolution (UXGA) and utilizes Silicon Motion's unique DualMon(TM) technology to run independent applications across multiple displays. To maximize LCD support, the EMB-845E has an integrated 24/48-bit dual channel LVDS interface onboard, allowing long distance LCD display signal transmission. This EmbeddedATX board features AC '97 audio with a 2-Watt stereo
amplifier, optical SP/DIF output, CD-in header, built-in DVI and TV out interfaces, as well as an optional TV tuner adapter. With strong graphics and multimedia capability, the EMB-845E can be broadly implemented in markets such as Point Of Sale (POS), Point Of Information (POI-Kiosk), and gaining. To make this board even more versatile, a Hampshire TSHARC-12 touch screen controller is included which can handle 4 and 5-wire touch
screens, enhancing its effectiveness in POS, POI and gaming environments.

If you are looking for a slim board for space-constrained applications, the EMB-845E is the one. The EMB-845E is low profile, 2" at its highest point excluding the CPU heatsink. It
promises great expansion possibilities compatible with the most cost-effective expansion standards. It supports 6 USB 2.0 ports or pin-headers, one Mini-PCI socket and one PCI slot which are PCI Rev. 2.2 compliant with a maximum throughput of 133MB/sec. The board offers 16 user-programmable GPIO pins in addition to the usual pair of CODM ports and single parallel port. The EMB-845E reserves more than enough flexibility for future expansion especially for customers whose applications may change in the immediate future.

o Suggested price in low quantities: $430 each for full version.
o Does not come with CPU, RAM, or add-on modules.
o Wiring kit is included, except for LVDS cable.
Share