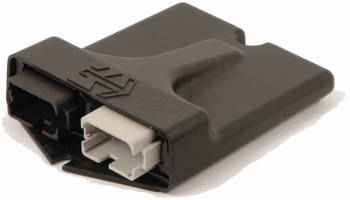 
Vernon Hills, IL – HydraForce has expanded its range of electrohydraulic controls with the addition of the configurable ECDR-0506A electronic valve driver. It can be used to enhance the control of hydraulic proportional valves used for transmission control, vehicle traction control, joystick control, and mobile equipment work functions, such as lifting, lowering, and rotating.

The ECDR-0506A has a 32-bit processor and six inputs capable of various signal types; four analog and two digital. It has five outputs, four are closed loop and one is open loop. Its 8-32 VDC voltage rating allows it to handle a range from battery to full voltage. It is also CAN-capable, with a CAN 2.0B communication interface capable of reading CANOpen and SAE J1939 communication protocols. A bi-color LED, red and green, provides a quick status check for troubleshooting.

“We called this valve driver an ECDR instead of an EVDR because it has an additional level of configuration capability compared to other proportional valve drivers,” said Chris Shader, Electronics Product Manager.  “Surveying the market, we really saw a huge gap in the capabilities of driver programming versus typical programmable controllers. The ECDR can really bridge the gap between higher priced programmable controllers and more affordable drivers. Its flexibility allows for the device to be easily configured for use in specialized applications, such as fan drives and transmission controls,” he added.

“We created an entirely new HF-Impulse configuration environment for the valve drivers,” said Chris James, Electronics Engineering Group Leader. “The ease and intuitiveness of the output and input configuration blocks coupled with the ability to create and replicate macros and create libraries of code are definitely going to be appreciated by our customers.”  Designed for use in extreme environments, the ECDR-0506A driver has a robust, compact, and fully sealed housing that provides excellent environmental protection from moisture and contamination, and Deutsch connectors that qualify for the highest IP69K environmental rating. It has an operating temperature range from -40 to 85°C (-40 to 185°F).