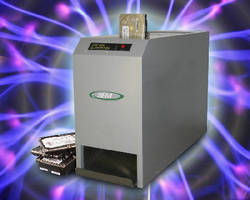 With effective field strength up to 40,000 gauss, Model EMP001 Eliminator Hard Drive and Magnetic Tape Degausser erases data from longitudinal and perpendicular magnetic recorded hard disk drives with up to 3 TB of storage and nominal coercivity ratings up to 5,000 Oersteds. Unit also erases data tapes with nominal coercivity ratings up to 2,800 Oersteds. Powered by 8 A at 120 V or 4 A at 240 V, degausser complies with DoD requirements for destroying classified information on magnetic media.

The EMP001 is easily operated on a tabletop. Hard drives or other magnetic media (up to 1" x 4" x 6") are inserted in a slot in the top of the compact (28" x 10" x 19.5") unit, the start button is pushed, and the fully degaussed items are ejected at the bottom of the chamber approximately 60 seconds later. Power requirements are 8 amps at 120 volts or 4 amps at 240 volts.

A leader in the secure destruction of electronic media and paper documents, Security Engineered Machinery, ISO 14001 registered, is the largest direct supplier of data-destruction equipment in the United States and operates the largest secure destruction facility in the Northeast, adjacent to its headquarters in Westboro, Massachusetts. The company's full-service engineering department designs special products, such as the currency destruction systems in use by the Federal Reserve Bank and other central banks. Every American embassy uses SEM equipment. Areas of expertise include the destruction of hard drives and other mixed media; "off-spec" or returned product for the pharmaceutical, medical device, and food industries; and heavy-duty, high-capacity shredders for recycling applications. More than 100 SEM authorized service centers are positioned to serve customers worldwide.
Share