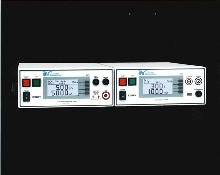 Lake Forest, Illinois, Dec. 2001 -Announced today by Associated Research, Inc., is it's new System 3100, which is an entry-level system designed for manufacturers who need to comply with safety agency standards requiring high voltage tests of insulation and high current tests of protective ground circuits. It comes complete with the necessary hardware and interconnection cables for performing the Dielectric Withstand, Insulation Resistance and Ground Bond tests with a single device under test (DUT) connection.

System 3100 is designed to be conveniently rack mounted side by side in a 19" rack. An optional rack mount kit that provides the necessary flanges for mounting and handles for easy access is also available. Added benefits include a graphic LCD and enhanced user interface. The graphic LCD is found on all Hypot III models as well as HYAMP III, which makes it much easier to set up tests and to review test results. System 3100 has the ability to perform the most common safety tests with a single DUT connection. This not only speeds up throughput and increases the reliability of tests but also presents a much safer testing environment for the operator. Other features include: