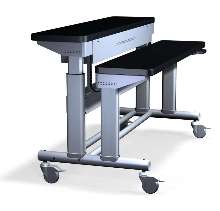 Elevate(TM) Electric Lift Table raises and lowers via keypad control and is offered in 2 styles: single-surface, where desktop moves up and down, or dual-surface, where back and front surfaces move up and down independently. Each style comes in 48 or 60 in. width and can be placed at heights from 29-42 in. from ground. Features include control box, cable trough, 4 in. rhombus locking casters, 250 lb overall weight capacity, and 16 ga steel frame.

Anthro Corporation, Technology Furniture®, the manufacturer and e-tailer known for its unique furniture for technology, announces the introduction of its new Elevate(TM) Electric Lift Table. With the touch of a keypad, the Elevate(TM) surface raises and lowers to provide an ergonomic height for multiple users.

Cables from equipment can be routed through the cable trough feature, which will also store the control boxes for the table. If the Elevate(TM) Electric Lift Table is used for PACs applications, the transformers for the PACs monitors fit perfectly inside the cable trough so they're hidden and out of the way.

A Power Bar can be added to the Elevate(TM) Electric Lift Table as a 12 outlet power source that fits conveniently underneath the top surface of the table. A sleek, sturdy CPU Slide Out can be added to the underside of the Single Surface tables. It slides out when access to the CPU is needed, and with its 360 degree rotation, offers easy access to CPU drives and ports; then tucks back under the surface and out of sight.

The Elevate(TM) Electric Lift tables come with large 4" rhombus locking casters, two single electrical leg assemblies, the keypad with up/down function, and the control box for lifting the columns. The top surfaces of the Elevate(TM) Electric Lift Tables are 1 ½" core, with a weight capacity of 150 lbs. for each surface, and an overall weight capacity of 250 lbs. The surfaces can be placed at a wide range of heights, from 29" up to 42" from the ground. The silver-colored frame of the table is composed of 16 gauge steel, and the electrical in each leg assembly is UL tested and approved. The Elevate(TM) Electric Table has a Lifetime Warranty on the table and a One-Year Warranty on the electrical.

Anthro Corp. was founded in 1984 as a wholly owned subsidiary of Tektronix, and became an independent company in 1988. Anthro provides furniture for technology for the engineering, business, medical, government, education, and home markets.
Share