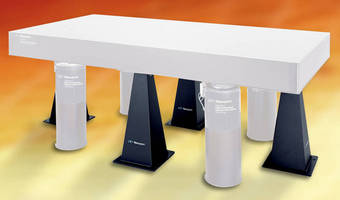 
Irvine, CA - Newport Corporation, a worldwide leader in laser and photonic solutions that Make, Manage, and Measure Light®, introduces an Earthquake Restraint System, Model ERS2010, designed to restrict the motion of pneumatically-isolated optical table tops during seismic activity. The new earthquake restraint system is certified and in compliance with the 2009 International Building Code (IBC) and the 2010 California Building Code (CBC). A minimum of three restraints is required to prevent possible tipping of a table during or after an earthquake and, once installed, the system does not affect optical table performance.

Each ERS2010 earthquake restraint is designed to be secured into a concrete floor at least 6-in. thick using eight Hilti anchor bolts. Seismic loads are distributed into the optical table bottom skin by eight socket head cap screws. The necessary hardware (not included with the restraints) is also available from Newport and can be ordered separately.

In order to attach the earthquake restraints to an optical table, the table must have a series of machine-tapped holes on the table's underside. Newport can machine the holes at the time the table and restraints are ordered. For modifications to previously-purchased optical tables, contact Newport's tech support team. For more information about the ERS2010 Earthquake Restraint System, please visit: http://www.newport.com/ERS.