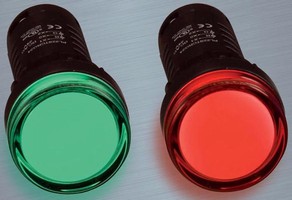 Illuminating green or red depending on conditions, PL22STC Series enables at-a-glance on/off load status monitoring via single device designed for 0.87 in. through holes. Green LED illuminates when powered on 2 of 3 terminals (2 and 0), and red LED illuminates when powered on 2 other terminals (1 and 0). Both LEDs are rated to last at least 100,000 hr and exhibit 100 cd/m2 brightness. Offered in IP65 housing, RoHS-compliant product can be powered by range of voltage options.

June 25, 2008 - Buffalo Grove, IL - Carlo Gavazzi has just released an innovative new dual color LED pilot light. With one pilot device, it is now possible to monitor if a load is on or off, as the LED will be illuminated in either green or red. The dual color pilot light is not only "inventory saving" as only one pilot device is now required, but the electrical panel also requires only one panel cutout vs. two. The PL22STC Series is designed for 22mm (0.87") through holes, and when it is powered on two of three terminals (2 and 0), the green LED illuminates, and when powered on two other terminals (1 and 0), the red LED illuminates. The LEDs are rated to last at least 100,000 hours and are ultra-bright, rated at greater than or equal to 100cd/m2 (9.29ftc). The dual color pilot lights are powered by one of five AC/DC voltages, which further reduces the number of part numbers required. They can be powered by 6, 12, 24, 48 or 110 volts AC/DC, or one of three AC or DC voltages: 220VAC, 220VDC or 380VAC. They are also housed in a durable IP65 housing, with operating temperatures of -25 to 70°C (-13 to 158°F). They are also delivered with a mounting nut, along with a gasket. The PL22STC Series are cULus listed, and carry the CE and RoHS marks, your assurance of a high quality and safe product. They are available from Carlo Gavazzi's North American network of sales offices, distributors or www.GavazziOnline.com, with a list price of $25.00. Any questions regarding this press release should be directed to Jim Dunn, Product Manager: 847.465.6100 x106 or jdunn@carlogavazzi.com Available in the U.S. from: CARLO GAVAZZI, 750 Hastings Lane, Buffalo Grove, IL 60089 Phone: 847.465.6100, Fax: 800.222.2659, Email: sales@carlogavazzi.com, Website: www.GavazziOnline.com