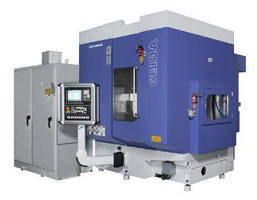 TOKYO -- Mitsubishi Heavy Industries, Ltd. (MHI) has completed the development of a new model in its best-selling "GE series" of dry-cut hobbing machines. The GE10A is ideally suited to mass production of small-diameter gears of the kind used in vehicle automatic transmission systems. Through a variety of innovations enabling machining with outstanding speed and efficiency, the GE10A delivers superlative productivity. The new offering will be making its debut at the International Manufacturing Technology Show (IMTS 2014) to be held in Chicago on September 8-13. MHI expects to market the GE10A primarily to automakers in North America.

The GE10A can accommodate gears with diameters up to 100 millimeters (mm). Radial and axial travel speed are both 20,000mm per minute, double the speeds of earlier products; the higher speeds have been achieved through the adoption of direct drive motors in the main spindle and table. Workpiece changing time has also been shortened by use of a high-speed loader, reducing idle time to 2 seconds, less than half the idle time with current models. For outstanding machining efficiency, the cutting length of the hob has been extended to 300mm and the tool's service life has been increased 1.7-fold. Idle time has been reduced by the incorporation of features including: a structure enabling simple set-up changes, without use of tools, of the grips used for handling workpieces, achieved through the adoption of a boltless design; and automatic tool changes in 90 seconds at the push of a button (optional).

In addition, the GE10A machines can be used with CNC control units made by Siemens, which are widely used on production floors in the U.S. and Europe; this now offers a choice between this German brand and CNCs made by Fanuc. As a measure against thermal displacement, cooling mechanisms have been incorporated into the main spindle and table, enabling high machining precision.

North America is currently undergoing a trend toward multimode automatic transmissions, and this is resulting in increased numbers of sun gears located at the center of the planetary gear unit as well as the pinion gears that make up planetary gears. Gears are also becoming increasingly smaller and higher in precision. In light of these developments, MHI will leverage its broad lineup of dry-cut hobbing machines for everything from rough processing to finishing to propose new solutions for mass-producing the smaller and higher-precision gears demanded on automatic transmission system production floors.

IMTS, held every two years, is one of the world's foremost machine tool fairs, on a par with Europe's EMO (Machine Tool World Exposition) and Japan's JIMTOF (Japan International Machine Tool Fair). Mitsubishi Heavy Industries America, Inc. (MHIA), a wholly-owned subsidiary of MHI, will be showing its GE10A as well as broaches(1) made by Federal Broach Holdings, LLC, an American firm that became an MHI group company in 2012, High-Speed Gear Shaper : SE15A,  Double Column 5-Face Milling Machine : MVR30, Table Type Horizontal Boring Machine : MAF150E. As a comprehensive manufacturer of machine tools, including hobbing machines, cutting tools and others, MHI and MHIA will use this opportunity to offer its full range of machining systems to machine tool users on hand from all over the United States and around the world.

1. Broaches are long bar-shaped cutting tools. When attached to broaching machines and "drawing" is performed, complexly shaped holes and outer surfaces can be finished with outstanding precision.

2. A measurement used to express the size of a gear tooth. It is derived by dividing the diameter (mm) of the pitch circle by the number of teeth.