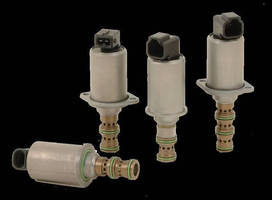 “Our drop-in cartridges are already widely used in the powertrain market and, while our current product is competitive, we wanted to improve upon its performance and efficiency,” said David Price, HydraForce marketing communications manager. To accomplish this, HydraForce analyzed the magnetic efficiency of its valves and redesigned them to use a minimal amount of current.  This allows the valve to use the same size coil but generate two- to three-times the magnetic force with up to 46% less current draw. Higher on/off force levels provide maximum flow capacity for the hydraulic application.

The coil itself was reconfigured with the electrical connector on the top, rather than the side. The top-mounted connector not only saves space by allowing tighter spacing between multiple valves, but also provides easier access from the top to attach wiring harnesses. “The idea for the top-mounted connectors came from the voice of the customer,” said Price. “Engine compartments are tight on space so any millimeter you can save is a good thing.”

Although G3 valves were developed for the demanding powertrain market, where high temperatures, contamination, and strict environmental regulations are prevalent, they can be used in any hydraulic application where a lower-flow, highly efficient control valve is needed.

HydraForce designs and manufactures high performance hydraulic fluid power cartridge valves, custom manifolds and electro-hydraulic controls.  They have created thousands of custom control solutions for a variety of off-highway industries, encompassing farming, construction, marine, material handling, mining and forestry as well as powertrains.  All five facilities will follow the same ISO 9001 standards to ensure global consistency in product quality. Since its founding, HydraForce continues to be a privately held company as it has grown to over 1000 employees, global manufacturing locations in North America, Europe and Asia, and a network of over 120 stocking distributors who can offer local support across the globe.
Share