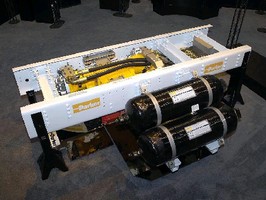 Built around Power Drive Unit Assembly, RunWise hydro-mechanical, hybrid system recovers brake energy and stores it to be used later. Energy is recovered when unit is in hydrostatic mode and brakes are applied. Upon braking, RunWise controller commands hydrostatic motors to become pumps, and brakes vehicle by converting vehicle inertia into stored, high-pressure energy in accumulators. System is intended to operate in environments of -40 to 120Â°F on vehicles in excess of 70,000 lb.

The first commercial partnership for the Parker RunWise drive system is with Autocar, LLC. Autocar LLC is a leading manufacturer and marketer of low-cab-forward (LCF) class 8 refuse trucks, and will offer its first vehicle featuring the Parker system in North America in Fall 2007.

"Parker is pleased to be working with a well-known leader like Autocar," said Clive Hindle, Business Unit Manager, Energy Recovery, at Parker Hannifin's Chelsea Products Division. "We worked closely with Autocar, and a consortium of companies and organizations around the world, to develop a marketable application for this technology. We believe that the RunWise drive system will significantly impact the future of the commercial and private transportation industries. With the RunWise drive system, we are continuing to build upon our past success and experience with commercial, hybrid drive systems, as first introduced in the mid-1980s, to create an entirely new system.

"Parker is a global company with the unique combination of technology and expertise required to bring this modern, series hybrid energy recovery system to market," continued Hindle. "Advanced components including the newly designed power drive unit, composite, light-weight accumulators, high-efficiency bent axis pumps and motors, filtration, modern electronics and fluid connection technology, all from Parker, make this system possible. The end product truly is a company-wide effort supported by the expertise and manufacturing capability of multiple divisions within Parker."

How it works
The RunWise drive system, built around the Parker Power Drive Unit Assembly (PDU), was designed for high start-and-stop applications. Power comes from the engine into the Parker PDU through the input shaft. The PDU drives the primary pump which supplies pressure and flow to drive two hydrostatic motors, or to charge the accumulators. The onboard RunWise controller determines how and when the pressure is used. The hydrostatic motors drive the output shaft through a simple two-speed gear reduction, either low or high. The vehicle always starts in low and shifts to high at a predetermined speed. As the vehicle reaches highway speed, the PDU shifts from high hydrostatic to direct drive. While in direct drive operation, the hydrostatic system is completely bypassed to maximize operational efficiency.

The RunWise drive system was designed to recover brake energy and store it to be used later. Energy is recovered when the unit is in hydrostatic mode and the brakes are applied. Upon braking, the RunWise controller commands the hydrostatic motors to become pumps, and brakes the vehicle by converting vehicle inertia into stored, high-pressure energy in the accumulators. Accumulated energy is stored until the next time the vehicle starts, when it is discharged to accelerate the vehicle instead of using power from the diesel engine.

Benefits of the system
The Parker RunWise drive system targets significant fuel savings. While vehicles with this system can utilize full engine power at any time, the system was designed to optimize efficiency by matching engine load with vehicle requirements. Reduced fuel consumption, a corresponding reduction in emissions, substantially reduced brake wear and improved acceleration are all benefits of the Parker RunWise drive system. In addition, there is no required operator shifting as the RunWise drive systems manages all shifting between low, high and DD. The system is intended to operate in environments of -40° to 120°F on vehicles in excess of 70k pounds.

About Parker Hannifin Corporation
With annual sales exceeding $8 billion, Parker Hannifin is the world's leading diversified manufacturer of motion and control technologies and systems, providing precision-engineered solutions for a wide variety of commercial, mobile, industrial and aerospace markets. The company employs more than 50,000 people in 48 countries around the world. Parker has increased its annual dividends paid to shareholders for 49 consecutive years, among the top five longest-running dividend-increase records in the S&P 500 index. For more information, visit the company's web site at www.parker.com, or its investor information site at www.phstock.com.
Share