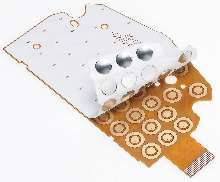 Four millimeter Dome Switches have Click Ratio of 45% ensuring positive feel with minimal noise. They are available separately, as arrays, or fully assembled as keypads with associated PCB and illumination. Units are suited for 3G and WAP cellular phones that include gaming option, which demands long operational life.

NEWTON, MA (July 29, 2003)-ITT Industries, Cannon has released a new 4mm diameter dome capable of up to 2.5 million operations, an increase that is especially advantageous for cellular phone manufacturers who are incorporating gaming functions into new generation handsets.

According to Bernd Steinebrunner, Product Director for Cannon's dome arrays, "Domes used in cell phones should typically only require a life cycle of 250-500K operations, so Cannon's one million lifecycle product is perfectly adequate for those applications. However, new technology 3G and WAP phones are commonly including a Games option on the menu, which demands a much longer operational life, which our new dome array provides."

The 2.5 million operational lifecycle domes have a Click Ratio of 45% ensuring good positive feel, with minimal noise. They are available separately, or the company can supply them as arrays, or fully assembled as keypads with associated PCBs and illumination, produced in its own ISO 900:2000 facilities.

Key to the performance of Cannon's long-life dome switches is the high quality materials used and the manufacturing test methodology employed. Steinebrunner comments, "At Cannon, we evaluate our processes and equipment under full operating conditions and environmental conditions. The nominal actuating trip force of 160g is exceeded during testing by nearly fourfold (600g) to ensure that devices withstand the robust demands of today's equipment makers."

Cannon provides a variety of components for cell phones, including dome arrays, keypads, switches and connectors.