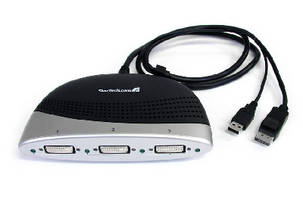 Groveport, OH - StarTech.com, a leading manufacturer of hard-to-find connectivity and technology parts has announced the release of the SP123DP2DVI Triple Head DisplayPort to DVI Multi Monitor Adapter, which expands the video output from a DisplayPort video card/source across three DVI-D monitors.

The graphics expansion module can be used to span the DisplayPort image output across three monitors or clone the primary output image onto the displays - a convenient solution for a broad range of applications including creating ultra-widescreen environments for digital signage video walls, viewing/editing panoramic videos/graphics, playing simulation-based games and more.