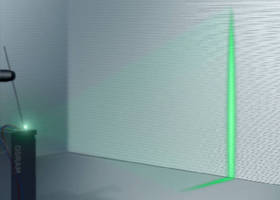 OSRAM Opto Semiconductors has achieved a major breakthrough with its direct emitting green indium-gallium-nitride (InGaN) laser. Laboratory results at the pre-development stage show that it already achieves an optical output of 50 mW and emits light in true green with a wavelength of 515 nm. Compared with semiconductor lasers based on existing technology that operate with frequency doubling, direct emitting green lasers are more compact, offer greater temperature stability, are easier to control and have higher modulation capability at several hundred MHz.

OSRAM has overcome the previous limits of the InGaN (indium-gallium-nitride) material system by succeeding in manufacturing the first direct emitting green laser diode from the InGaN material system with a high optical output. The diode emits a "true green" light, which is defined by the spectral range of 515 to 535 nm. In this range, efficient high-quality semiconductor lasers have been commercially available to date only as frequency-doubled versions. In the medium term, however, direct emitting green lasers could replace frequency-doubled lasers for numerous applications.

Green lasers are used in a variety of medical and industrial applications, and also as light sources in mobile mini-projectors. A direct emitting green laser can help make these projectors even smaller, with even better performance. The great advantage of laser projectors - a consistently sharp, true-color, high-contrast image irrespective of the projection distance and projection surface - should one day be available for cell phones and cameras.

Preliminary performance data are impressive. In pulsed mode operation at room temperature, the laboratory prototype has achieved an optical output of 50 mW, and the threshold current density is around 9 kA/cm². Dr. Christian Fricke, Chief Technology Officer at OSRAM Opto Semiconductors, said, "With this demonstration, we have shown that green lasers can be manufactured from indium-gallium-nitride. This puts us on course to produce compact, cost-effective, high-quality green laser light sources."