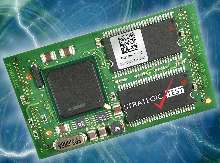 UltraFast UF3132 provides 8 analog input channels on one card; up to 16 cards can be combined in industrial PC. Product employs eight 12-bit A/D converters with max sampling rates of 25 MSamples/sec, provides simultaneous sampling, and has up to 256 MSample onboard signal memory. Each channel has 8 software-selectable input voltage ranges from Â±50 mV to Â±10 V and option of 50 Ohm or 1 MOhm input impedance. Unit has 2 modes of operation: standard and FIFO.

Up to 16 cards can be synchronized to create 128 channel systems.

Boston, USA -- May 12, 2004. With modern desktop PC's offering fewer PCI slots, there is an increasing demand from engineers for Test and Measurement manufacturers to produce PCI cards with more measurement channels. Similarly there is a large installed base of older CAMAC multichannel measurement systems whose users are currently looking to upgrade to a PC-based solution that would allow them to use a standard analysis program such as MATLAB.

The new UltraFast UF3132 from Strategic Test Corporation has been designed to address these needs and is the first digitizer PCI card to provide 8 analog input channels on a single card. Furthermore, multiple cards can be combined in an industrial-type PC to create systems with up to 128 synchronized channels.

The UF3132 has eight 12-bit A/D converters with maximum sampling rates to 25 MSamples per second, provides true simultaneous sampling and has up to 256 MSample onboard signal memory for recording long signals at the maximum rates. Each channel has eight software selectable input voltage ranges from ±50mV to ±10V and the option of 50 Ohm or 1 MOhm input impedance. These features allow the user to optimize the set-up for each channel to match the characteristics of the sensor.

By separating the analog and digital circuitry, the designers have achieved dynamic specifications that are comparable with other digitizer cards having 14-bit A/D converters. The UF3132 measured specifications include a Signal to Noise Ratio of better than 62.8dB, Total Harmonic Distortion of less than -62.5 dB, a Spurious Free Dynamic Range of greater than 79.3 dB.

Software drivers for Windows XP, 2000, NT, ME, 98 and Linux are supplied, while drivers for MATLAB, LabVIEW, Agilent's-VEE and DASYLab are available as cost-options.

The UF3132 has two operating modes. In Standard Mode, the input signals are digitized and then stored into the onboard memory. At the end of the measurement the user is able to retrieve the data into the PC for analysis or storage to hard disk. This mode allows all 8 channels to be used at the maximum sampling rates of up to 40 MHz.

The alternative FIFO Mode uses the PCI Bus Master capability of the card to continuously transfer data from the UF3132 card to the PC during the measurement process and allows signals longer than the available on-board memory to be generated. Data is transferred continuously (gap-free) across the 32-bit PCI bus at up to 50 MSamples per second, so when using up to 16 UF3122 cards as a synchronized system the Standard Mode allows the cards to be used at maximum speeds without restriction.

The sampling rate of the signals can be programmed from 1kHz to the 25 MHz maximum rate when using the onboard clock, or from DC to 25 MHz when using an external clock signal - a feature often used to synchronize the card to external equipment. In either case, the user is free to specify any sample rate within these ranges and the software driver will automatically adjust the onboard clock signal hardware divider and PLL to suit. As many digitizer cards limit the available sampling rate to a few pre-selected ranges, Strategic Test has created an Application Note (AN_01 Sampling Rate Determination) that describes its technology in greater detail. This can be downloaded from the company's website at www.strategic-test.com

Customers who do not want to make their own programs can use the SBench measurement/oscilloscopes program running under Microsoft Windows that is supplied with the card. SBench supports all of the UF3132's features. Signals can be recorded and displayed graphically then cursors used to make graphical analysis. Statistical calculations and FFT's can be performed on the data. More sophisticated analysis can be performed created using third-party programs, such as MATLAB by exporting the signal data as ASCII/Text files.

The UF3132 has an extensive list of available options. In addition to expanding the on-board memory from the standard 8 MSamples up to 256 MSamples in various increments, there is the Multiple Recording option for recording a series of waveforms at very high speed (over 20,000 per second are possible), Gated Sampling that starts and stops the recording when an external TTL signal changes level, Star Hub Synchronization for synchronizing the clocks and triggers of up to 16 cards, the Digital Inputs option that adds 32 digital inputs that record at the same speed as the A/D's and the Extra I/O option for controlling external equipment or reading external status information with the additional 24 slow digital I/O channels and 4 analog 12-bit D/A output channels.

All UltraFast cards are supplied with free drivers for Windows and Linux, the SBench measurement and signal generation program, source code programming examples in Visual Basic, c/c++ and Delphi; two years hardware warranty and lifetime software updates including future Windows and Linux drivers. Technical support is provided at no cost for the product lifetime.