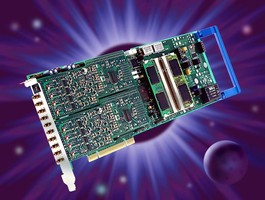 Featuring 64 MB signal memory, UltraFast 25 MS/s 12-bit A/D Digitizer Cards are available in 3 models with 2, 4, or 8 input channel configurations. Each input channel has its own ADC and amplifier, and up to 16 cards can be configured as synchronous system of up to 128 channels sharing common internal or external clock. Multiple recording, gated sampling, ABA mode, fast digital inputs, BaseIO, and timestamp options are available.


UltraFast UF2-3130 series provide simultaneous sampling on 2, 4 or 8 input channels, advanced triggering and have a fine resolution sampling clock - all on a single 66 MHz PCI card

Woburn, MA USA - August 9, 2006. Strategic Test Corp has released three new Digitizer cards. Based on the new UF2 series PCI-X (66 MHz/32-bit PCI) carrier card, the three models are available in 2, 4 or 8 input channel configurations. 64 MByte signal memory is standard but this can be expanded to 4 GBytes allowing long recordings at the high sample rates. The cards are supplied with drivers for Microsoft Windows and Linux, with free downloads of future OS version drivers such as Windows Vista. Drivers for MATLAB, LabVIEW, VEE, DASYLab and LabWindows/CVI are available as cost-options.

Each input channel has its own ADC and amplifier. This ensures true simultaneous recording on all channels and allows the user to program the input voltage range and dcV offset to best match each sensor. Up to 16 cards can be configured as a synchronous system of up to 128 channels, sharing a common internal or external clock. It is possible to set trigger conditions on multiple cards combined with AND/OR, a feature often used in production test processes. Apart from the external trigger that is standard on all UF2 cards, each channel can be programmed with edge, window, slope and pulsewidth triggers. A Re-Arm trigger condition has been introduced on the UF2 series that reduces the possibility of false triggering on noisy signals.

While many digitizer cards have fixed sample rate ranges, the UltraFast cards have always allowed the user to use a fine resolution sampling rate. The resolution depends on the chosen sample rate (an application note is available on request). The user simply programs the sampling rate required and the driver adjusts the onboard PLL and hardware driver to deliver the closest clock possible. The new UF2 series employs a new design that has even finer resolution and also offers the possibility to install a user specific quartz when an exact sampling rate is required by the application - a feature that is unique.

A number of application specific cost-options are available. Multiple Recording uses a memory segmentation technique to allow recording of a high-speed series of, such as RADAR signals. Gated sampling only records when the external Gate TTL signal supplied by external equipment goes high or low (user definable). The ABA mode was known on traditional transient recorders, but until now has not been available on PCI cards. Introduced in the UF2 series, it allows a slow and fast sampling rate to be defined so that memory is conserved prior to the trigger event and the critical signal recorded at the faster required sampling rate. Engineers who need to record high-speed digital signals for synchronization with the analog, can use the Fast Digital Inputs option that adds 4 TTL input lines to each A/D channel, and records them at the same sample rate. The BaseIO option is most often used to control external equipment or to read/write status signals. It adds 8 TTL lines programmable directionally in two 4 bit groups. Finally, the Timestamp option is used to record the time that each trigger occurs, but can also be fed with a GPS time signal to synchronize multiple cards operated at different locations.

The Ultrafast UF2-3130 cards are available immediately and have the following price ranges: the 2 channel version costs 3260 Euro, 4 channels is 4280 Euro and the 8 channel model is priced at 7250 Euro. Volume discounts and OEM customization prices are available on request.

About Strategic Test
With a product range of more than 150 high-speed Digitizer, Arbitrary Waveform Generator and high-speed Digital I/O PCI, 3U PXI and 6U CompactPCI cards, Strategic Test Corporation is one of the leading suppliers of high-speed PC-based instruments. The UltraFast cards are designed at the R&D facility in northern Germany and distributed through our offices in Woburn (MA, USA) and Stockholm (Sweden).

The first high-speed measurement card for PC's was designed in 1989. All of the current range cards has been developed since 2002. The UF2 series based on the PCI-X 66 MHz/32-bit PCI bus is the latest generation and sets new standards in onboard memory size and user flexibility. Strategic Test's clients include global electronics, semiconductor, defense, telecommunications and medical instrument companies, government funded research labs and universities in five continents.