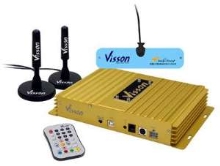 "Taiwan will play a significant role during the coming decade in the digital TV industry, specifically for DTV standards such as DVB, ATSC and ISDB. Furthermore, with our local manufacturing capabilities and outsourced manufacturing plants in China, our company and country is positioned very favorable to fulfill the vast global demand for high-quality digital TV products that is expected during the coming decade", stated James Wu, CEO for Visson Technologies, Inc.

"We are targeting niche automotive markets with our VC3300T and VI3270T receivers," Sherry Tsai, Vice-President of Sales & Marketing for Visson, added today. "Probably the strongest selling point for Visson's new range of mobile digital TV receivers is its ability to provide unequaled viewing quality at high driving speeds. We are confident that our company has the ability to be an absolute leader in the coming global digital TV market, and our main focus will be to combine cutting edge mobile digital TV solutions with car navigation systems", Tsai further added.

Doppler compensation - Unequaled DTV Reception
The VI3270T is a diverse state-of-the-art DVB-T receiver, and was designed by Visson for optimal in-vehicle digital TV reception. With properly installed dual opposite-directed antennas, the VI3270's dual Anti-Doppler digital RF cores inter-compensate with each other, providing unequaled reception ability that can pick up the slightest digital TV signal waves. The VI3270T fully complies ITU DVB and Nordig II standards, and includes anti-shock, anti-violation and Car-Break Video-Shutoff functions. With all its in-vehicle features and the exceptional Diversity Anti-Doppler RF reception, the VI3270T is in a class of its own and the ultimate solution for in-vehicle mobile DTV receivers.

About Visson Technologies
Visson Technologies, Inc., a member of the VIA Technologies Group, specializes in the design and manufacturing of digital TV and multimedia consumer products, with its main focus on digital television receivers for home entertainment, mobile and handheld products. Our aim is to design digital TV receivers compliant with global digital TV standards, including DVB-T, DVB-H, ATSC and ISDB. Further to its digital TV solutions, Visson diversifies across a wide spectrum of cutting edge technologies, including navigation systems, car PC's and smart TV's, and integrating these with their range of DTV receivers.