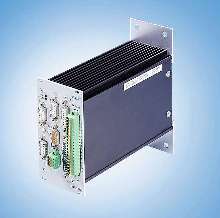 The HNC 100 offers true axis synchronization. Due to open- and closed-loop control algorithms specifically tailored to the special characteristics of hydraulics, optimum performance of electrohydraulic drives can be achieved.

The customer can program the sequence via a PC using the HNC's WIN-PED software. The NC programming provides greater flexibility of the HNC, and it can complement existing user know-how with its common platform.

As a standard, each HNC 100 features a local CAN-bus, which can be used to link the individual drives for general data exchange or for implementing synchronization controls, resulting in a scalable automation concept using modular principles.

Finally, the HNC 100 can communicate with higher-level controls via Profibus-DP, INTERBUS-S, and CANopen fieldbuses. As a new option, the HNC 100 is now available with SERCOS interface, the most common communication system for electrical drives.

Bosch Rexroth Corporation, a merger of Bosch Automation Technology and Rexroth, is a wholly owned subsidiary of Robert Bosch GmbH. In the year 2001 the separate companies had total revenues of approximately $3.42 billion (3.86 billion Euros) and a worldwide total of around 26,000 employees. Divisions include Industrial Hydraulics, Electric Drives and Controls, Linear Motion and Assembly Technologies, Pneumatics, Service Automation and Mobile Hydraulics. Bosch Rexroth - The Drive & Control Company - offers comprehensive solutions for drives and motion
control in 80 countries around the world.