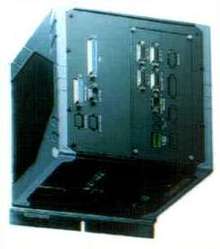 Improved accuracy and productivity for the CNC machine user are due to the performance characteristics of the FastWire protocol. With this protocol, the 10/Series Numerical Control transfers data at 90 Mbaud, which far exceeds other major CNC control manufacturers.

With synchronization between the master (CNC) and all FastWire devices being totally generated by hardware, the interpolation of more axes with a greater accuracy and precision is possible even if the number of FastWire devices increases. The resulting synchronization provides performance higher than previously possible for CNC applications. With up to 64 FastWire devices and each device being treated as a simple memory location, the reading and writing of all the specific variables of any device is possible without influencing data transfer speed.

The CNC will also auto tune the machine, reading such variables as electrical power and following error in real time, without any external sensors or instruments.

OSAI has been producing high speed, precision CNC products for industry ever since inventing these controls as part of Officine Meccaniche Olivetti in 1957. Today OSAI is an independent company with over 50,000 controls installed around the world. OSAI-USA is headquartered in Bloomfield, CT.
Share