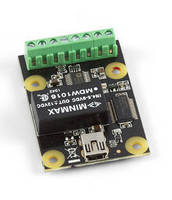 
0-10V devices can now be controlled with Phidgets.

" We, up to this point, did not have a Phidget that offered Digital Outputs" says Bernard Rousseau, Director of Marketing at Phidgets. " We found out that quite a few of our customers were using 0-10V devices and were frustrated by not being able to connect them to a Phidget and take advantage of our great API" added Bernard.

The 0-10V standard is widely used in devices for dimming fluorescent and LED lights. Other devices that can be controlled by 0-10V are valve actuators, and motor controllers.

Software Environment
"Unlike a lot of our competitor's products that require their users to write some firmware code in order to use their sensor, we are completely "Plug and Play" says Bernard Rousseau, Director of Marketing. "With Phidgets, you plug it in and start using it and when it comes to programming, the user, not us, decides which operating system and which computer language he wants to use", added Rousseau.

Pricing and Availability
The 1002 - PhidgetAnalog 4-Output is available now. The suggested resale price is $85.00 Canadian.

About Phidgets
Phidgets, Inc. is a technology leader in the design and manufacture of low-cost control and sensing modules connected to personal computers through the USB port. Phidgets products are ideally suited for fast prototyping. The privately held company is based in Calgary, Alberta, Canada.