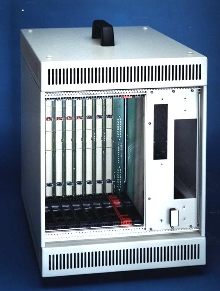 Hybricon's development kit consists of a 9-slot tower with an 8-slot PICMG 2.16 Ethernet Packet Switching backplane which has a mix of PICMG 2.16 node slots and standard CompactPCI slots for
development lab use.