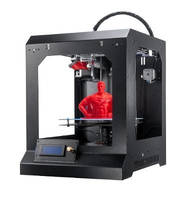 
ZHUHAI, China -- Leading Chinese 3D printer manufacturer Zhuhai CTC Electronic Co., Ltd held a new press conference on the afternoon of May 28 in its headquarters in Zhuhai, announcing the roll out of the CTC Giant 3D printer.

The FDM product, developed by open source 3D printer maker Ultimaker, is regarded as the giant among desktop models as it comes equipped with the Cura slicing software, a feature very much in demand, with maximum print size of 305mm X 305mm X 405mm.

A distinctive 3D printer with Wifi functionality made its first appearance worldwide at the press conference. Accompanied by apps that work both on Android and iOS operating systems and are based on open source Ultimaker technology, the printer can be operated by remote control through any hand-held mobile device, eliminating the need to wait beside the printer while managing the print job.

The Giant 3D printer, with an eye-catching all-steel seamless design, fully caters to the needs of high-end users in the design and education sectors with its powerful set of features. The release of the product optimizes CTC's large size product line while bringing the technological level of the entire desktop 3D printer industry to a new level. The printer retails for RMB 9,800 in China and USD 2,500 ex-China.

This printer will go on sale simultaneously on JD, Tmall and Suning starting from June 1.

Detailed specifications are as follows: