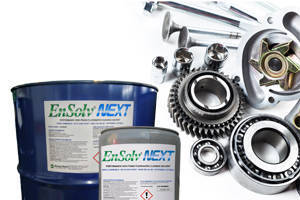 Consisting of non-flammable, trans, and fluorinated solvent blend, EnSolvÂ® NEXT is thermally stable and can be used safely and effectively in most modern vapor degreasing systems. Near azeotropic formulation is also gentle on most plastics and elastomers and compatible with all metals. Product is suitable for cleaning electronics, optics, aerospace, and oxygen systems.


The past year and a half has not been kind to the public perception of n-propyl bromide.  Last year, the ACGIH published its 0.1ppm TLV opinion paper, which, right or wrong, is considered by many professionals to be a reliable indicator of the safety of chemical compounds.  Later in 2014, the NTP listed nPB on its 13th Annual Report on Carcinogens as "reasonably anticipated to be a human carcinogen."  While there are major questions surrounding this assessment, given the fact that the NTP 2-year cancer study has not been fully explored to determine how tumors occurred, and given that the tumors were not consistent across different sexes of rats or mice, the fact is that some tumors did appear in the study.  Early in 2015, the US EPA opened a public comment period on its website for a petition to have nPB listed as a Hazardous Air Pollutant (HAP).  Within two months, it opened another comment period on listing nPB as a SARA reportable chemical.  In this ever-changing regulatory environment, it is natural to be very concerned about the future of n-propyl bromide with regard to regulations, health, safety and more.

How do we react to these developments and what options do we have for precision cleaning?  Well, the good news is that there are many alternatives available.  The bad news is that they are all much more expensive than n-propyl bromide. Almost all of them that are comparable at vapor degreasing to n-propyl bromide solvents, are blends of 1,2-trans-dichloroethylene (trans) and non flammable fluorinated solvent compounds.  Some of these include the DuPont Vertrel™ fluids, the 3M Novec™ Engineered fluids and others. There are also wholly new compounds like Honeywell Solstice™ PF, which are such low boilers (66F) that they require special equipment modifications or new equipment altogether to contain them, and pressurized canisters (similar to propane cylinders) for delivery and storage.  Still, KB value is often the most important indicator of how well a solvent will clean soils. The ideal is to have a solvent with a KB value of 90 or greater in order to approach the cleaning power of traditional solvents like perchloroethylene (KB 90), trichloroethylene (KB 130) and n-propyl bromide (KB 129).  So what comes NEXT?

EnSolv® NEXT is a brand new non-flammable, trans and fluorinated solvent blend from Enviro Tech International, Inc.  It is a near azeotropic formulation having a KB value of approximately 91, is exceptionally thermally stable (no acid acceptance or other testing required) and can be used safely and effectively in most modern vapor degreasing systems.  EnSolv® NEXT is also gentle on most plastics and elastomers and compatible with all metals.  It is a highly effective cleaning agent on electronics, optics, aerospace, oxygen systems and many other applications.  For a free quote or sample, please contact Enviro Tech International today at (708) 231-4184 or by email at sales@envirotechint.com.