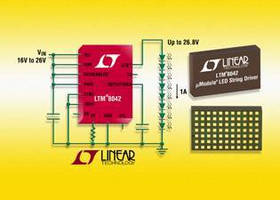 Capable of operating as boost, buck, or buck-boost with 3-30 V input voltage range, uModuleÂ® LTM8042 and LTM8042-1 drive strings of up to 8 white LEDs or 9 red LEDs. Model LTM8042 sources up to 1 A of current, while Model LTM8042-1 sources up to 350 mA. Each features True Color PWM(TM) dimming with 3,000:1 ratio or analog dimming with 10:1 ratio. Housed in 9 x 15 x 2.8 mm LGA package, switching regulators are suited for industrial illumination, backlit displays, and automotive lighting.


MILPITAS, CA - Linear Technology Corporation introduces the LTM8042 and LTM8042-1, DC/DC uModule® LED drivers for strings of up to 8 white LEDs or 9 red LEDs. Capable of operating as boost, buck or buck-boost with 3V to 30V input voltage range, each device is a complete LED driver solution in a 9mm x 15mm x 2.8mm LGA (land grid array) package. The LTM8042 and LTM8042-1 boast 0.5% output current line regulation accuracy and can withstand up to 40V input transients. The LTM8042 sources up to 1A of current, whereas the LTM8042-1 sources up to 350mA. Each features True Color PWM(TM) dimming with 3,000:1 ratio or analog dimming with 10:1 ratio. Their compact, robust, and complete solution permit a quick design-to-fabrication of LED string driver circuits in applications such as industrial illumination, backlight displays, scanners, and automotive as well as avionics lighting.

The LTM8042 and LTM8042-1 are switching regulator LED drivers with very accurate output current line regulation, ideal for driving LEDs or for general purpose current sourcing. Inductors, capacitors, regulator IC and compensation circuitry are enclosed and protected in a plastic package resembling an IC. These devices are pin-compatible with each other. For more information, visit www.linear.com/8042. The LTM8042 and LTM8042-1 are rated for operation from -40°C to 125°C, priced starting at $8.59 each in 1000-piece quantities.

o 3V to 30V Input Range with up to 40V Transient Protection.