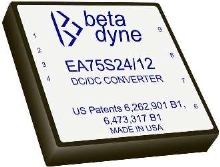 Based on patented technology for synchronous rectification and noise reduction, the EA75 series is the result of several well-received Custom Products that required high power density and low noise. Accordingly, the EA75 series packs up to 75W of power output in a 2 x 2 x 0.50-inch metal case that offers six-sided shielding and an industry standard pinout.

Units are available 4-6 weeks ARO. Pricing for the EA75 series starts at $79.20 each; discounts available for larger quantities.