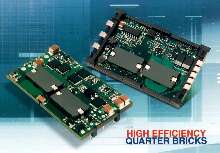 Bricks, Bricks, Everywhere... But...
Single-output, quarter-brick DC/DC power converters are the most highly sourced power supplies of all time. At least 25 legitimate suppliers offer the same basic product in an intense global competition that is already witnessing casualties.

The leaders in the competition, most of whom entered the Q-brick wars with 20 Amp devices, continue surging forward in a race of 10-Amp "leap-frog" that now has outputs pushing 60-70 Amps. Unfortunately, as the likes of DATEL, Ericsson, Power-One and Tyco play "mine is bigger than yours," an entire class of users/applications has been left behind.

What About Those 8-15 Amp Requirements?
Until now, there has been a glaring price/performance void in the DC/DC product landscape. Power designers requiring 7-8-9 or more Amps (at 3.3V) have been forced to pay for full 20A quarter-bricks (or more expensive 1/8-bricks) as traditional "hockey puck" (potted module) DC/DC converters are not available at those current levels. The new ULQ's fill the void. Fully rated for 15, 20 and 25 Amp output currents, these high-performance Q-bricks are specifically aimed at those "middle-ground" 8-15A applications.

The Most "Usable Power"
Recognizing that rated output currents of most bricks deteriorate as ambient temperatures rise, DATEL designed the ULQ's to deliver full power even when the heat is on. Since virtually all open-frame bricks require air flow, it is now common to describe a given device's "usable" power/current as the amount deliverable at +70°C with 1 m/sec. or 200 lfm (linear feet per minute) air flow.

Thanks to their high efficiencies and careful thermal layout, all the 15 Amp ULQ Models deliver their full rated output power/current under those conditions, as do most of the 20/25 Amp models. This gives the Series the distinction of delivering full power at higher temperatures than any other Q-brick family.

Why 2250Vdc Isolation?
The new IEEE Standard 802.3af (Power Over LAN) outlines specs for sending power over a twisted-pair in a CAT 5 cable to assorted ethernet devices (VoIP telephones, security cameras, etc.). Among other things, the spec calls for 2250Vdc isolation between the 48V going over the cable and other working voltages. DATEL anticipates that 2250V will displace 1500V as the industry standard for DC/DC isolation, and the ULQ's are designed to meet that new requirement. All models also meet UL/EN60950 safety requirements for BASIC insulation.

Lead-Free Construction
ULQ Series Q-Brick DC/DC Converters are the first products formally announced under the DATEL Lead-Free Initiative. This program eliminates all lead from our assembly and pinning processes. ULQ's employ pc boards that are finished with electroless nickel/immersion gold (ENIG). The package pins for both through-hole and SMT models are tin-plated copper. All units are assembled in DATEL's facility using high-temperature lead-free alloys.

SMT Package with Heat Shield
Surface-mount ("M") models of the ULQ Series employ a high-temp plastic lead frame to maintain coplanarity (to 0.004 inches) and also to support the unit's heat shield. The heat shield (which is removed and discarded or recycled after assembly) maintains a 50°C differential between the ULQ's SMT components and the hot circulating air of a reflow oven. Consequently, the ULQ M's - which are assembled using high-temp lead-free solder - can be attached to a user's board with the same solder.