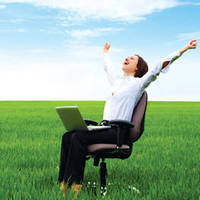 Designed to help maintain safe and healthy carbon dioxide levels, RFCO2RHTemp2000A monitors temperature, humidity, and carbon dioxide in real-time. Wireless unit can transmit data to central PC or into MadgeTech Cloud Services for monitoring from any Internet-enabled device.Â Alarms can be set up within MadgeTech Data Logger Software to audibly sound from device, or send text or email alerts to users when CO2 levels meet or exceed acceptable levels.


It was recently announced that the levels of CO2 (carbon dioxide) on our planet earth are measurably higher than ever before. From an environmental point of view, this is thought to be attributed to burning fossil fuels. Alternatively, the carbon dioxide we humans emit when breathing specifically contributes to indoor CO2 levels which affects us more than some realize.

It is well known that breathing in carbon dioxide is not good and can have negative effects on human health and well-being. Some buildings, situations or environments are more vulnerable or prone to this problem.

Have you ever been in a meeting and began dozing off? Or do you remember getting tired during a long lecture in school? Although some may blame this on a boring presenter, the reason for nodding off can probably be attributed to increased levels of CO2.

When a group of people are enclosed in an area, such as a classroom or office space, for a long period of time, CO2 levels tend to rise as people continue to convert the available oxygen into carbon dioxide. Beginning symptoms of exposure to high concentrations of CO2 can begin as shortness of breath and range to headaches, nausea, coma and in extreme cases death.

In 2012, a study was done on the direct impacts that increased CO2 levels have on human decision making. The study was performed by the Department of Psychiatry and Behavioral Science from the Upstate Medical University at SUNY Syracuse and the Indoor Environment Department from Lawrence Berkeley National Laboratory. Twenty-two subjects were exposed to varying levels of CO2 and asked to complete tests where they had to make decisions during each exposure. Overall, the results showed that as higher levels of CO2 were introduced to the environment, decision making abilities decreased.

In order to be proven as fact, many more studies and tests will need to be done on the impacts CO2 has on human decision making. Evidence of decreased decision making abilities can be applied to an educational or office setting as having detrimental effects. When making important decisions in a work or school environment, simply having too much CO2 in the environment can have undesirable effects on the outcome.

So where does all of this carbon dioxide come from? Ventilation or HVAC systems are generally put in place to continually circulate air so that the carbon dioxide that is being exhaled is filtered to avoid oversaturation of the gas. In a perfect world, these filtration systems would always be in working order and breathing in carbon dioxide would not be a concern for large groups. However, many factors can impact the effectiveness of ventilation systems, and some older structures may not have them at all.

To combat this, carbon dioxide levels must be accurately monitored. Data loggers, such as the RFCO2RHTemp2000A can be employed to accurately monitor temperature, humidity and carbon dioxide levels in real time. This wireless data logger can transmit data in real time to a central PC or into MadgeTech Cloud Services for up to date monitoring from any internet enabled device. Being able to view this data in real time gives supervisors the ability to notice when levels are exceeding the acceptable limits and make the adjustments to maintain the environment and productivity. Alarms can also be set up within the MadgeTech Data Logger Software to audibly sound from the device, or send text or email alerts to users when CO2 levels meet or exceed acceptable levels.

Having the proper monitoring devices in place takes the guesswork out and instills confidence that safe and healthy carbon dioxide levels are maintained at all times.
Share