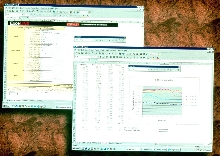 ExceLINX offers a fast, cost-effective method for acquiring and analyzing data using Microsoft's popular Excel spreadsheet application to control the test hardware, as well as log data directly to a file or spreadsheet/graph. Without sacrificing ease of use, ExceLINX provides more versatility and power than the "start-up" software often bundled with instruments and plug-in boards. The capabilities of ExceLINX rival software packages costing hundreds of dollars more.

Applications and Markets. Excel is a universally known spreadsheet application that combines a user-friendly graphical interface with powerful analysis, presentation, and data import/export capabilities. Keithley's ExceLINX is an "add-in" that enables Excel to control instruments and data acquisition hardware. For some time, Keithley has bundled ExceLINX DAQ with many of its data acquisition plug-in board products as an "Up &
Running" software accessory. The ExceLINX product family now provides the same high level hardware control and data manipulation for Keithley's Model 2700 Multimeter/Data acquisition System and Model 2750 Multimeter/Switch System. These
instruments are already used in such applications as laboratory research and education, quality assurance, manufacturing, burn-in testing, and related test and measurement applications.

Who Can Benefit. ExceLINX is ideal for novice and occasional users who want to begin acquiring and viewing data quickly, without investing time in programming. Advanced users, programmers, and system integrators will find the software helpful for rapid system prototyping and validation.

Price and Availability. ExceLINX for the 2700 and 2750 is available on CD-ROM and is priced at $395 (order part number EXCELINX-1A). The package includes application examples and documentation to help users make immediate, productive use of the
software. For users who prefer to create applications using LabVIEW(TM) or LabWindows(TM)/CVI, drivers are available from the Keithley web site (www.keithley.com). Discounts may be available to existing users of the Keithley Model 2700 or 2750; please call for details. ExceLINX DAS, which supports only Keithley's
data acquisition plug-in cards, is available for download at no charge from the Keithley Web site.
Share