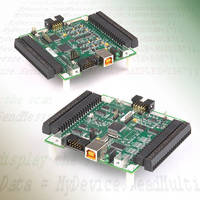 Bus-Powered USB-7202, with 8 analog input channels, and USB-7204 boards, with 8 single-ended or 4 differential analog inputs, include Message-Based DAQ OS-independent protocol that allows devices to be programmed with text-based messages. Software framework can be ported to multiple OSs and allows DAQ operations to be programmed through common command interface. Primarily intended for use with protocol, boards are multifunction measurement and control devices.

A new 7000 series product line, which includes the USB-7202 and USB-7204 boards, combines small form-factor, bus-powered USB hardware, and a light and agile software framework that can be ported to multiple operating systems. The software framework, a core technology to the series, is called Message-Based DAQ (MBD).

MBD is a well-defined protocol that permits the programming of DAQ devices using simple text-based messages. The MBD protocol greatly simplifies driver and application development, because all DAQ operations are programmed through a common command interface, which is composed of a consistent, extensible firmware interface and an open-source, cross-platform API.

The firmware parses text-based messages transmitted through a device driver, and converts these messages into DAQ-specific commands that control the device. This concise and well-documented interface allows driver development for multiple operating systems, and also supports O/S-independent embedded systems that need to communicate only over a USB root port.

The USB-7202 and USB-7204 boards are multifunction measurement and control devices intended specifically for the MBD protocol. Intended primarily for OEM applications, both are shipped as open stackable PC/104-sized boards without enclosures.

Each product ships with a 2-meter long USB cable, four nylon standoffs with screws, and a CD containing a Windows® installer file (msi), the MC7000 help file, and an archive file containing installation files for a Linux operating system.

"We developed the new architecture specifically for OEMs," explained Jim Stevens, Measurement Computing's vice president of R&D, "The Message-Based DAQ architecture is ideal for developers who value a small driver footprint, an easy-to-learn API, and the ability to port their application to virtually any operating system. The MBD software API is open source, so OEM developers can strip it down, enhance it, and otherwise modify it depending on their specific needs. The USB-7202 and 7204 are just the first two in a series of MBD products under development."

Measurement Computing Corp. respects your online time and privacy. If you would like to be removed from future mailings, you may unsubscribe by clicking remove me. If you experience problems accessing this link please reply to this email with UNSUBSCRIBE in the subject.
Share