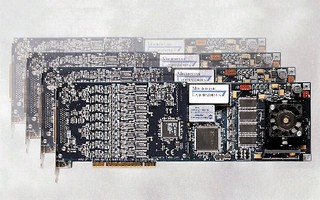 
Bellevue, WA, July 28, 2006 - You now have an affordable building block for creating high-channel count systems that sample inputs simultaneously. Microstar Laboratories, Inc. makes Data Acquisition Processor (DAP) boards and systems for data acquisition and control, and the company today announced a new mid-range DAP board, model number DAP 5380a/526, powered by an Intel Pentium 233MHz CPU. An individual board has sixteen analog inputs and can acquire 14-bit data at up to 800k samples per second per channel. The company has designed the board to work well in multiples.

Networks
Each DAP 5380a/526 includes a 233MHz Pentium processor. This processor runs DAPL, a multitasking real-time operating system optimized for data acquisition and related control functions. You control this onboard intelligence from your PC with easy-to-use software or with applications that you already know. Onboard intelligence not only protects the time-critical parts of your application from local PC delays, it allows
synchronization between hardware in different PCs on a network over a parallel DAP-to-DAP network independent of other network delays. Some customers have systems like this with many hundreds of channels.

Industry Standard Software
You can configure and control any DAP from your PC with DAPstudio, a Windows application. You can download a full version of DAPstudio to try it out for yourself and see how easy it is to use. DAPtools Standard includes options for alternative development paths using applications that you may already know. With these options, you can configure and control any DAP from LabVIEW, DASYLab, MATLAB, C++, VB, and any applications that use DLLs. Even if you want your completed application built around software that you or your users already know, once you find out how easy DAPstudio is to use, you still may want to use it during the development phase.

Developing an Application
DAP boards acquire data, converting analog signals into digital values and streaming these through conceptual pipes that you predefine using DAPstudio on your PC. As the onboard processor transfers data from pipe to pipe it carries out operations specified by you...again using DAPstudio. A typical application may require six or seven of these onboard operations from the more than 100 DAPL commands available. They configure the DAP for the application. In many cases you then can use DAPstudio to run your application - from any PC on a network - with no custom programming and no other vendor software.

Conclusion and Next Step
You now can easily build high-channel count data acquisition systems that sample inputs simultaneously. The new DAP 5380a/526 board from Microstar Laboratories lets you do this. You can configure the board using DAPstudio, a Windows application, and then use industry standard software for your final application. You also could run an entire application using only DAPstudio. The DAP 5380a/526 board costs $3995, and you can order it now for immediate delivery. DAPstudio costs $199. The company provides unrestricted versions of both hardware and software for evaluation at no charge, and you can download a full version of DAPstudio right now. Visit www.mstarlabs.com.

Other organizations may claim - or may have registered - as trademarks any trade names, logos, and service marks that appear in this document but not in the list above.

Microstar Laboratories makes it a practice to use an appropriate symbol at the first occurrence of a trademark or registered trademark name in a document, or to include trademark statements like this with the document.
Share