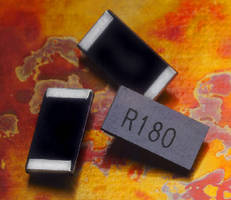 Featuring metal foil technology, the TLRH3AW current sense resistor allows for a 2 Watt power rating in a 2512 package size. Performance characteristics include a TCR of ±75 ppm in 10mΩ~22mΩ, ±50ppm in 24mΩ~270mΩ, in a 1% resistance tolerance.

The TLRH3AW provides resistance to extreme temperatures, as well as to thermal and mechanical shock, moisture and vibration. In addition, this ultra-low profile resistor offers a thickness as low as 0.5mm. The TLRH series is AEC-Q200 qualified and available with lead-free terminations to meet EU RoHS requirements.

Used primarily for current detection, TLRH3AW current sense resistors are ideal for applications within the telecommunications and consumer electronics markets, specifically for applications such as inverters, power supplies, computing devices, tablets and motor controls. Lead time is 15 weeks, with samples available upon request.